I have a friend who is rebuilding a home. A couple of nights ago I visited the place he is temporarily living and he showed me the plans for his dream.

He recently bought a property that is in disarray … overgrown on the outside and structurally compromised on the inside. Being somewhat of a designer, his first step was to sketch a blueprint of what he intends to build. 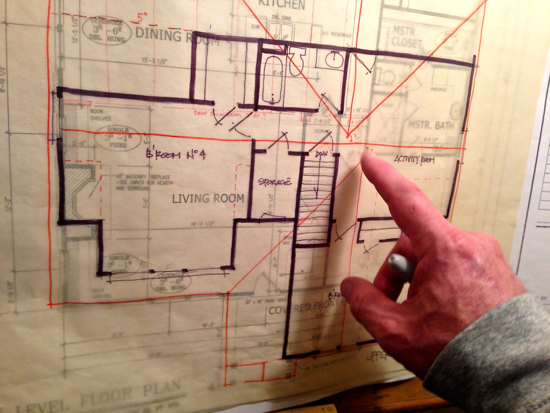 After seeing the design, it’s obvious he has a vision of rooms and porches. He can see where furniture will be placed and cars will be parked. Even more importantly, he already hears mealtime conversations around a table and the laughter of his family echoing through the halls.

In June the home will be complete, a near replica of the sketches, beautiful inside and out, filled with laughter and love.

As you begin 2015 do you have a blueprint of the life you want to have a year from now? Can you see a preferred future? Are there relationships you need to rebuild? Is there a cause calling for your time?

I’m amazed at how close we usually get to our target.

In the Bible there is a word that serves as a good reminder of this concept. The word sin. Whether you are a Bible reader or not, chances are you’re familiar with the word. Most of us assume sin is when we don’t do what we should, or we do what we shouldn’t. Actually, the word is an old archery term that means to “miss the target” … “to live without aim.”

I don’t know about you, but the last thing I want to do this year is live an aimless life.

For my friend, I’m guessing there will be times when he wants to give up. Once the demolition starts it will likely get worse before it gets better. There will be doubters, and it will be expensive.

But I know my friend. He is resolved to build something great and he has two things in his favor. One, a track record of excellence, and two, a blueprint to serve as his target.

December 2015 is coming … fast. The year will end with you living in one of two places. Where you are now or where you want to be. Before things get rolling, take the time to set your aim.

I suggest a blueprint.

What needs to be on your leadership blueprint in 2015?