Last Saturday my worlds collided. I felt like George Costanza, unable to handle the torment of my circumstances. For me, it all went down on a football field. My alma mater, Jacksonville State University, left the kids table and decided to sit with the adults. 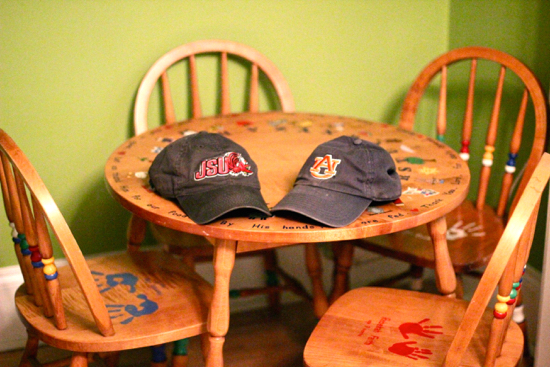 What made the scenario even more crazy is that my wife is an Auburn girl … and not just any Auburn girl. I’m talking three generations of Tiger bloodlines. Her grandfather graduated from Auburn about 100 years ago. Both of her parents have degrees, season ticket holders since the 1950s. Now in his 80s, my father-in-law was there on Saturday cheering, “War Eagle!” Her brother made it through the plains with a diploma. These people bleed orange and blue, and frankly I’m a fan myself. Therefore, the dilemma … cheer for your school or honor your family.
Go Gamecocks!
It was supposed to be a paycheck for little J.S.U. and a cakewalk for the potential national champions. With 40 seconds left in the game the children had the lead 21-14. My heart cracked a little when the grown ups scored in the final seconds to tie the game. It was like the feeling you get when your mom crushes you in Monopoly on her last roll of the dice.
Order was restored and Auburn went on to win in overtime sending my Gamecocks home with a few more fans and a lot more recognition.
J.S.U. reminded me of a few reasons why I’m proud to be a graduate.
They were willing to try something hard. By the way, this was not the first time. If you will remember, they actually beat an SEC team, Ole Miss, a few years back. Back then they showed up in Oxford with no business being in the game. They literally shocked the college football world when they won. So, what did they do? They tried something even harder by scheduling Auburn.
Like J.S.U., great leaders continually stretch themselves. They try stuff. When they succeed, they try even harder stuff. When they fail, they try again. When was the last time you tried something hard?
They refused to listen to the critics. Not only did J.S.U. try something hard, but they did it in the face of 87,451 Auburn fans who believed they should not be there. Truthfully, their own alumni (me included) gave them very little chance to even be competitive. The point spread going into the game was 46 ½. That means Vegas believed Auburn was seven touchdowns better. Wrong! That’s the thing with critics. They often don’t know what they are talking about.
As a leader, rest assured, there will always be people who will tell you why you should settle for easy. Please don’t listen. Truthfully, if you try something hard enough, you will likely fail. But trust me, you will certainly grow. And the last time I checked, growth should be one of the top goals of every leader. Stop listening to the naysayers. Their opinion rarely matters. Are you paralyzed by the voices of those who are not in the trenches with you?
They risked more than they thought they would receive. While the promised payday was attractive, the risk was much greater. Injury, humiliation, and a dent to their brand were all on the line. In the end, they did themselves proud and the brand actually grew. But there actually was a lot to lose.
The best leaders somehow navigate risk and reward, rarely playing scared, but also not overvaluing short-term gains. When you look at your own organization, how long has it been since you were willing to risk with little certainty of return?
There comes a time when every leader has to be willing to leave the kids table and truly test himself. Even when knowing the results might be disastrous. The good news is, maturity, growth, and victory are the rewards for those who are willing to block out the noise and accept the challenge.
While the scoreboard might have said otherwise, I would argue my Gamecocks were the real winners on Saturday.
Leadership Begins at Home,
Randy
When was the last time you intentionally put yourself in an underdog situation?
Comment Below …

ROLL TIDE!
In a political corporate business culture, I’m likely an underdog every day I speak with executives….game on!

Go Gamecocks! #staycocky. I really needed this today! It’s so hard to fail and not get bogged down and start compiling the list of why you shouldn’t have tried in the first place.

Thanks Kim … Press on!

Randy, great analysis and link back to how we can apply what JSU did. I am proud FOR you. Lance