Ark / All / Advice for Aspiring Authors

After yesterday’s post, How I made it from Remedial English to Fifth Avenue, I received a several questions about the writing process. Today my friend, and fellow author, Mark Miller agreed to guest post with some advice for aspiring authors. I could not say it any better than Mark does. Mark’s latest book, Leaders Made Here is now available as an INTEGREAT Leadership resource. The book lays out the five steps to building a leadership culture.
Enjoy Mark’s post … 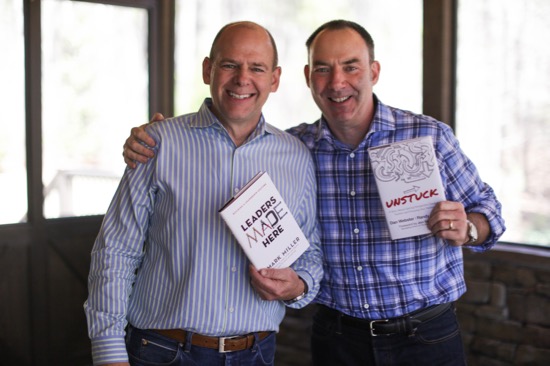 It happened again this week – I received a call from an aspiring author. The longer I write, the more people I talk to who “have a book in them.” It happens so often, I have begun to wonder: Does everyone have a book in them? Maybe they do!
For me, I consider myself an accidental author. Had my friend and mentor, Ken Blanchard, not challenged me to write a book almost 20 years ago, I don’t believe I would have ever written a book.
Six books later, I still don’t think of myself as a writer. I often tell people I don’t write real books – I just tell stories. What I’ve discovered: there is a market for stories. But, whether I consider myself a real author or not, people call wanting advice.
I’m always delighted to hear about their dream. Some of them share deep and profound messages intended for a broad audience, while others are much more personal, maybe a book for their children.
In every conversation, I ask where they are in the process. Often, they have done very little. Then, they ask me a question: “What advice do you have for me?”
I swallow hard, because most will not like what I am about to say…
Until you have a first draft, you don’t have a book – all you have is an idea and good intentions. Write the first draft!
It doesn’t have to be good; it probably won’t be. However, after you have a first draft, you can begin the second.
When I wrote the first draft of The Secret, my wife read it and said, “It’s not half as bad as I thought it would be.” Success! At that moment, I had a book that could be edited, improved, and ultimately, 17 drafts later, Ken and I have sold over 600,000 copies in more than 25 languages. How is that possible??? It all started with a crappy first draft.
Give yourself a deadline and finish the first draft!
[Tweet ““We are all apprentices in a craft where no one ever becomes a master.” —Ernest Hemingway”]