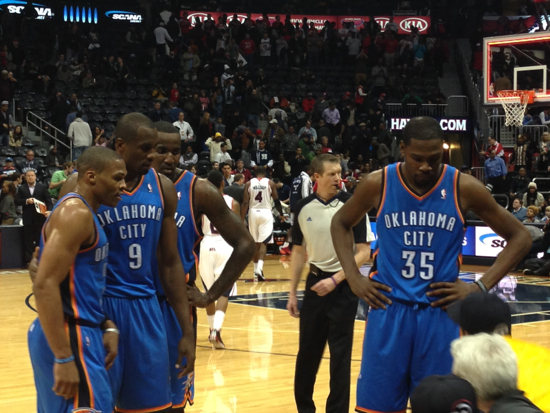 A couple of nights ago I had the opportunity to sit court side in Atlanta as the Hawks hosted Kevin Durant and his Oklahoma City Thunder teammates. The Thunder won the game, but didn’t play up to their full potential.

Why? Because they were distracted by outside voices.

Two rows in front of me there was a man wearing a yellow jacket and a black baseball cap who received more attention from the Thunder than the Hawks did. He was a world class heckler, jeering the Thunder with his every word. The team jawed back and forth with the man during the entire fourth quarter. When the game ended, rather than celebrating the victory and heading back to their locker room, the Thunder players immediately headed to the front row to talk more smack with the motor mouth.

Some would say OKC is one of the most high performance teams on the planet. They would be wrong. While the Thunder do have championship potential, they appear to lack championship focus.

What separates world class teams from those who are merely good is not only their level of talent, but also their ability to focus. Great teams are not distracted by outside voices. They are not concerned with what others are saying as much as they are with how they are playing.

If today finds you and your team trapped in a midseason malaise of mediocrity, perhaps it is time to tune out the noise and refocus on the task at hand.

Why do you think leaders are so tempted to listen to external voices?