How Do You Scale Culture?

Ark / All / How Do You Scale Culture?

How Do You Scale Culture?

For the past year I have spent a lot of time thinking about and attempting to scale my company, InteGREAT Leadership. The journey has been challenging, but very rewarding as we continue to expand our reach to organizations and teams.
I recently ran across a scale question that trumps expanding a business. Someone asked, “How do you scale a culture?” It is a great question. My friend Mark Miller has written a new book, Leaders Made Here, on building a leadership culture. You can pick up a copy at the bottom of the post. Today, Mark has agreed to tackle the question of scaling culture with the following guest post.
[Tweet “”Culture is what people actually do with a high degree of predictability.” via @leadersserve”]
How Do You Scale Culture?
Scale is an interesting challenge. It is the aim of countless organizations, but real scale is hard to achieve – not as unlikely as a finding a unicorn, but really hard to do well. My perspective on this topic is limited: I’ve worked for one organization for almost 40 years. Now, we have grown from about $150 million to almost $8 billion during that span, but I’m convinced scaling assets is not nearly the challenge as scaling a culture. This is something we work on daily.
What is a culture? My working definition for decades has been the same: the collective habits of the people. Not the aspirations of leadership. Our culture is not what we wish it would be, it is what it is. However, I do believe leaders can change a culture and this can certainly include aspirational elements, but a culture is what people actually do with a high degree of predictability.
Here’s a tangible example. One of the elements of our culture is that when someone says, “Thank you,” we say, “My pleasure.” No, we’re not perfect and we’re not robots – it doesn’t happen every time. But it happens a lot, millions of times every day. Why would I say this is part of our culture? Because it actually happens. I don’t say this because we want people to say “My pleasure,” it is only part of the culture because people say it with great consistency.
You may be wondering, what’s the point? Before I answer the question, please don’t miss the magnitude of this achievement. Our independent restaurant operators employ about 100,000 people, and the majority of them are under the age of 20. So, to have tens of thousands of young people saying “My pleasure” was really hard to accomplish. I didn’t even mention turnover. But, the really hard part is important. If you want to scale your culture across districts, divisions, states, territories, and even the globe, prepare yourself – it is really hard to do.
Here are a few ideas on how you can increase your chances of scaling your culture . . .
Be Clear – What are the key elements of your culture? How could you institutionalize these attributes? If life-long learning is a cultural norm, you could require everyone to have a personal development plan. Make no mistake, vagueness will scale and when it does, you have nothing but vagueness. Are you clear on the elements of your culture that matter most? Are you clear on the actions that can foster scale?
Be Selective – You can’t scale everything. I believe attempts to do so quickly look like micro-management. In his book, The Power of Habit, Charles Duggin talks about power of keystone habits – those habitual behaviors which have a ripple effect. Work to discover these for your culture.
Be Accountable – If you want to scale a certain behavior, determine how you’ll measure your progress. And by measure, I mean real numbers, not approximations or estimates. If you want people to say, “My pleasure,” find a way to measure it.
Be Relentless – We watched a video recently of our founder asking, reminding, and telling us the appropriate response when someone says thank you is … what? We practiced saying “My pleasure” in groups as large as 5,000 people. The interesting thing about the video – it was pieced together from clips over a ten-year period! What are you relentlessly and tirelessly communicating regarding your culture?
Culture is powerful – so powerful, Peter Drucker once said, that “culture eats strategy for breakfast.” If this is true, don’t you want to be the one creating the culture?
[Tweet “”Culture eats strategy for breakfast.” – PeterDrucker “]
If you are looking to build a leadership culture for your organization, I encourage you to pick up copies of Mark’s book, Leader’s Made Here, and read it with your leadership team. 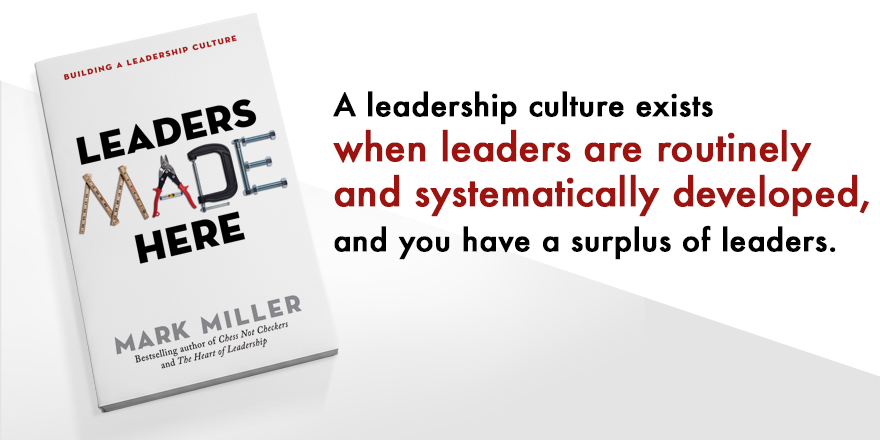 Thanks, Tim. I appreciate the encouragement!