Let Me Off This Plane: Day 4 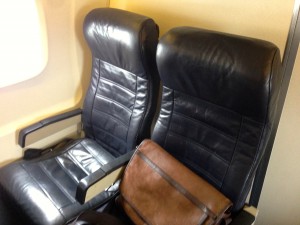 Yesterday’s blog ended with me missing my Tuesday flight from O’Hare to GRR.

I was headed to my friend Dan Webster’s part of the country where we are working on the sequel to Finding Your Way. More on that in a few months.

My lack of airport speed (yes I literally ran a half mile through the terminal) landed me on a standby flight. The best moment of my day was hearing my name called and given a seat assignment.

The most challenging moment of my day was the moment when I laid eyes on the seat. Last row, against the window. Not as challenging as last Friday’s situation, but a legroom nightmare nonetheless.

While the flight was short, by the end I was thinking, “Let Me Off This Plane.”

Leaders are not real big on being last. We like being out front and setting the pace.

Sitting in the back row gave me a different perspective. That of a follower.

Has it been a while since you thought of those who are on the “back of your plane?” If so, I challenge you look through their lenses. What would you see if you did?

Great leaders create an environment of excellence and appreciation for everyone in the organization. There are no Back Row Joes.

Raise the bar on how you treat those who are last and, not only will you have more people who want on your plane, you will have fewer who want off.

Why is it important for leaders to pay attention to their team members who are in the trenches?