Ark / Integrity / Looks Can Be Deceiving

For the past month I have been traveling. Between work and play, I visited 13 states during June and learned a lot about leadership and about myself. But I must say, my greatest reminder came last night when I arrived back home.

I found the reminder in the edge of my backyard in the form of a fallen tree. A tree that looked perfectly healthy when I left town. There is definitely a reason they say, looks can be deceiving. 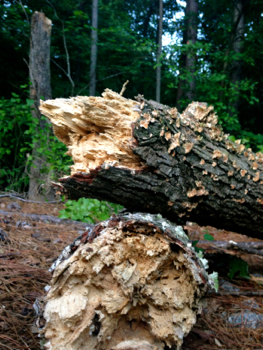 The massive tree was snapped in seven different places. When I saw it, I thought to myself, there is no way I’ll be able to move it without help from my chainsaw. I was wrong. A slight kick to one of the pieces revealed the problem. The inside of the tree had no substance. While not hollow, the wood was practically pulp – light as a feather – thanks to the work of a nasty team of termites. Slowly, but surely, they have been attacking what appeared to be a towering picture of health.

As a leader, it is tempting to focus more on outside stuff, than the stuff on the inside. This is understandable. The parts that are seen in public impress people. However, unless your public persona is backed by a private integrity, you will have very little impact. In fact, eventually, you will likely find yourself broken, your influence shortened, and your regrets piled high.

I’ll tell you more about my travels in the coming days. In the mean time, as you head into the second half of 2014, I encourage you to take time to evaluate your insides. If you have spots that are under attack, make an effort to rid yourself of the termites before it is too late.

What are some danger spots that can attack the insides of a leader?

Pay for a college essays

Welcome back. Love the tree image, but sorry you had the mess to clean up.

Thankfully it was a light mess, Coach. Good to be back!

Randy, great reminder on what is on the inside will eventually show its effects on the outside. You can only show a false front for so long. We can even try to fool ourselves but eventually it will come out… I want only good to come out so I need to focus on purging the bad and fill myself with the good… I can only do that with God’s help…
(I look forward to hearing about your travels…)
Ja

We enjoy reading your blogs. Hope you are doing well.
Brent and Kay England

Thanks Brent. We are doing great. Good to hear from you!

Sadly, I can relate to your writings. As we hold our secrets in secret, they do manifest themselves on the outside. Sometimes as anger, other times as impatience. AA teaches that we are only as sick as our secrets.