Ark / Leadership / Your Problem Solvers Might Just Save the Day

One of my favorite things I do throughout the year is spend time with the Pittsburgh Pirates MLB Club encouraging the coaches and players. Every time I am with the team I feel like I receive more value than I add. Yesterday was such a day.

I had the chance to hang out with the Buccos and attend a game at PNC Park in the Steel City. What a game! The good guys Raised the Jolly Roger and sent the first place Nationals packing in a thrilling 3-1 victory.

Pirates ace, Gerrit Cole became the first pitcher in baseball to win 14 games this year, but it was not without excitement. In the top of the eight inning, on a hot day, Cole ran into trouble when a couple of Nats reached base. With two outs and the game on the line, Bryce Harper, the NL leader in home runs came to the plate representing the potential winning run.

Thankfully, the Pirates have a structure to solve problems. It is called a bullpen. After a meeting on the mound, Bucs skipper Clint Hurdle called on reliever Tony Watson and a few pitches later the fire was out and so was Harper. 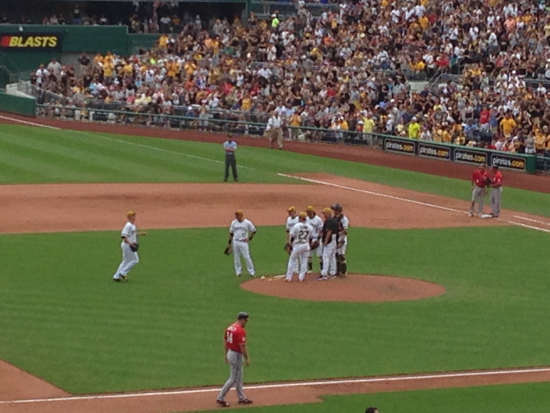 The bullpen is one way baseball teams are prepared to handle a crisis. The relief pitchers represent their problem solvers.

When you look at your organization do you have a structure in place to solve problems? High performance organizations expect the unexpected. They resist the temptation to ignore difficulties.

Someone once told me there are two types of leaders … goal setters and problem solvers. If that is true, it would be a mistake to undervalue the problem solvers on your team. As you approach this week, I encourage you to identify 3-4 problems you are currently facing and then mobilize and unleash your bullpen. Rather than looking down on them for not being goal setters, recognize their value to your organization.

Remember, the next time you find yourself in trouble your problem solvers might just save the day.

What structure do you have in place to solve problems?